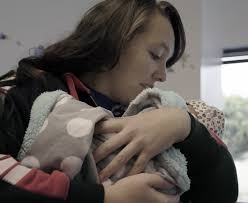 It is striking that in a film as filled with human drama as the HBO documentary “Foster,” which airs Tuesday, the most memorable images may be of paper. Once in a while the camera pans across teetering piles of overstuffed folders, each one representing the story of a child who has been reported to the Los Angeles County Department of Children and Family Services. Each folder makes the problems of the foster care system seem more overwhelming and even unsolvable.

The documentary is disturbingly accurate in explaining the problems of child welfare agencies, but it is less good at outlining solutions. By filling in around its edges, “Foster” can nonetheless serve as something of a guide to the practices that can do the most to help the 18,000 kids in Los Angeles County’s care, and the half-million in foster systems nationwide.