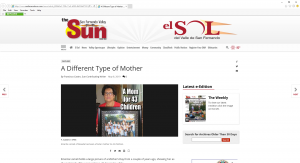 Emerita Lomeli holds a large picture of a Mother’s Day from a couple of years ago, showing her as the matriarch of four generations, all dressed in white.

There are 28 grandchildren and two great-grandchildren along with her five sons and one daughter. Also among the crowd of Latino faces stands a young blonde girl who Lomeli did not give birth to, but whom she loves as deeply as her other offspring.

Her name is Brittany McCutcheon, now 25, who came to the Lomeli home in Reseda nearly two decades ago and never left.

Back then, Lomeli had just started her life as a foster mom. Brittany was 7, and had been removed from the custody of her biological mother due to the problems she was having.

The girl didn’t speak any Spanish and Lomeli didn’t speak perfect English. But the bond that grew between them was just as strong as if it were an umbilical cord.

“She’s my mom. The person who raised me,” said Brittany, in a phone interview. “They only spoke Spanish and I didn’t speak any, but we helped each other.

“I consider them my parents. They are the reason I am what I am.”

Before hanging up, Lomeli, 73, reminds Brittany about the family gathering this coming Sunday, May 12, at a park to celebrate Mother’s Day. “Vas a venir Mija?” (“Are you coming my daughter?”) asks Lomeli in Spanish. “Si, mom,” responds Brittany – who now speaks perfect Spanish. They both say goodbye with an “I love you.”

Love is what Lomeli has given out equally to all 43 foster kids who have passed through her home the past 18 years. Some have stayed as little as one month. Others, like Brittany, stayed several years.

A retired cosmetologist, Lomeli continues to care for foster children who need a mother figure. She currently has six girls, ranging from ages 12 to 18.

A native of Jalisco, Mexico, Lomeli said she never thought about becoming a foster mom. It was her son, Monico, who first became a foster parent. He lives on the same block she does, and Lomeli and her husband, Ramon, would take care of the kids when Monico and his wife Cora needed a respite.

Monico and Cora later adopted three kids, one of them with Down Syndrome. Another of Lomeli’s sons, Cesar, and his wife Jessica, are also foster parents.

She did. The first kids she received were a 1 ½-year-old girl and a 6-year-old boy, both African American and brother and sister. They were with her eight months.

Even after they returned to live with their biological mother, she would bring them over to Lomeli’s home.

“The boy would go and lay down on where he slept and didn’t want to leave,” remembers Lomeli. “We were glad that he felt happy of the time he was here.”

Lomeli said she has treated all of the foster children the same as her own progeny. They all had the same rules: make your bed before going to school, go to school, clean the bathtub after taking a shower and clean your room every week.

“I do the same (with the foster kids) as I did with my kids. I don’t make distinctions,” Lomeli said.

he adds she’s hardly ever had troubles with the children. She only remembers a recent foster girl who ran away five times in the month she was with her. The girl was from San Pedro, and never got used to the rules or being away from that area.

But other than that, Lomeli says “I don’t find [being a foster parent] difficult.”

She enjoys being greeted on the streets by kids who remember passing through her house but whom she no longer recognizes. The fact that they remember her speaks well of her dedication.

Lomeli makes sure all the kids in her care attend dental, psychiatric and any other kind of appointments they may have. One even became a United States citizen while under her care. She attends parent meetings of the remaining foster kids at their schools and gives them plenty of time and advice, whatever the subject.

“Communication is paramount,” she says.

She gives the kids care and love. She said they fill her with joy as well.

“I’m filled with gusto doing this, of seeing them become successful, becoming somebody, overcoming obstacles, going to college and getting a profession,” Lomeli said.

Just recently, another young woman who lived in the Lomeli home and now attends college out of state, called Lomeli for advice as to whether she should continue her education. “You’re young, study as much as you can,” Lomeli told her.

She says she feels younger because of them and it fills her home with love.

“They’re all my kids, nothing more and nothing less. I feel like their mother,” she said.